Christian finally managed to obtain the scan of the music score of Sophie von Erlach (maybe my asking the head of museums assistant helped a bit too), so we urgently need to practice.
The return favour for having access to this source is us giving three Sundays of performances at Château Wildegg, the first one in August. His friend Esther is currently studying the scores, we have to decide what parts of a quadrille might work on the existing music, and certainly we shall have to practise the valse and the allemande.

A wee glimpse from an impromptu dance at the very location (not to live music, but to the famous "push the button to hear some music" installation every museum appears to have). As you can see, we didn't plan to dance, otherwise I would certainly not have worn such a long trained dress with embroidery.

Posted by Seidenweberin at Tuesday, May 28, 2013 No comments:

Earlier this month I've had the great pleasure to attend a stage de danse by Annie Vinot-Leborgne known through her groupe "Les Révérences" , organised by my friend Christian in Bâle.
If you've ever have a chance to attend a class given by her, don't let it pass. You will discover that, despite being a more or less advanced dancer (I started figure ice-skating aged 6 1/2, and never stopped dancing since), you suddenly develop yet another pair of left feet and the pleasure to sort them out.

Evidently, I continued to practice the steps, and feel now more or less confident and less muddled when hopping about. Oddly enough, the pictures of the Bon Genre started to make more sense, and after having hopped, slided, muddled through figures as diagonal chains in La Poule (In Scottish Country Dance terms: Think chain with corners, Strahtspey-step and some additional hopping...) by Pierre la Mésangère, published in 1812.Plate 43: two couples dancing holding hands in a line. 1812 Hand-coloured etching, British Museum Accession No. 1866,0407.900
La Poule is one figure in a Quadrille. Early Quadrille are quite dissimilar to their Belle-Epoque counterparts, as they are danced with some complicated steps, what require training. The Term "Quadrille" is usually applied to a dance set of 8 dancers (4 couples), but the same dance can also be danced by 4 dancers, in a "Quadrette". We started of by "Le Pantalon", followed by "L'été", then "La Poule" - the one you see up there, though we've ended all the ladies facing up and the gentlemen facing down, followed by "La Trénis and La Sirie", ending with "L'Austerlitz"

We danced the Trénis to a tune with audibly took it's inspiration of "Partant pour la Syrie"what is claimed to be written by Hortense de Beauharnais (or possibly one of her music teachers. Hortense was an accomplished dancer and musician, it's not without cause that the song was attributed to her)
If you'd like to hear that song, check Paula Bär-Gieses's Video (She's delightful).
Back to La Trénis: As you can see in the picture - the gentleman on the right does the same as we did: wiping his forehead and wondering "How many feet do I have?" After the quadrille comes the valse:
Just look at this delightful depiction of waltzing :-)
Annie introduced us to the differences between the valse as depicted by Wilson (in 1816) and the modern valse. For me the most striking difference is the lack of the 123123123 what we find in modern dance, but an even 1-2-3-1-2-3-1-2-3. Once mastered, it makes for a rather harmonic dance. Once mastered, mind. 
The Valse (what Wilson calls the French Waltz) is built as followed: Marching, then followed by the Slow Waltz. The Sauteuse succeeds the Slow. Sauteuse can be translated into "hopping" - and hopping it is. The issue for my balance-sense: As the valse is danced in a very small circle with your partner, one is turning constantly and much faster than in a modern waltz - and with the sauteuse the speed improves. After the Sauteuses followes the "Quick" - what had me flattened out on the floor, my poor head was spinning so much!
But coming back to the difference between the dances depicted on these delightful gravures and what we are presented with as soon as we watch a TV-drama or a movie: These dances are all danced on the demi-point (not full point as in more modern ballet), but always on the balls, the dances always start from 3rd position. There is no walking about, no slouching, no parade-ground. It's very sportive, very energetic to dance, but for onlookers it the dance looks serene and relaxed (When watching accomplished dancers). If you would like to have a taste of these dances, my best tip would be: Check for a Scottish Country Dance group near you (You will be astonished how many of those are about). While the rhythm isn't quite the same, it will give you the balance, the poise and the mental exercise of dancing in a Quadrille, trains you to dance together (Eye contact. Smiles. Laughter. Fun!), the Strathspey step is similar to the base step we use in Quadrille dancing of 1er Empire.

And practicing alone in front of a mirror is period too ;-) Posted by Seidenweberin at Saturday, April 20, 2013 No comments:

How fantastically modern is this?

Nothing is as inspiring as having returned from a ball. A discussion there on the possibility of more improvised dancing compared to the formal quadrille and earlier country dances (Contredanses) led to a lady sending me these two images of the Dancer Annette Köbler, painted byBartholomeus Ziesenis in 1812, from the Rijksmuseum.nl


The paintings reminded me very much of a sketch I've once seen by Gottfried Schadow, of the dancers Maria and Salvatore Vigano, a bit of hunting in one of my books and a quick Wikimedia-Search, here we have Maria Vigano: 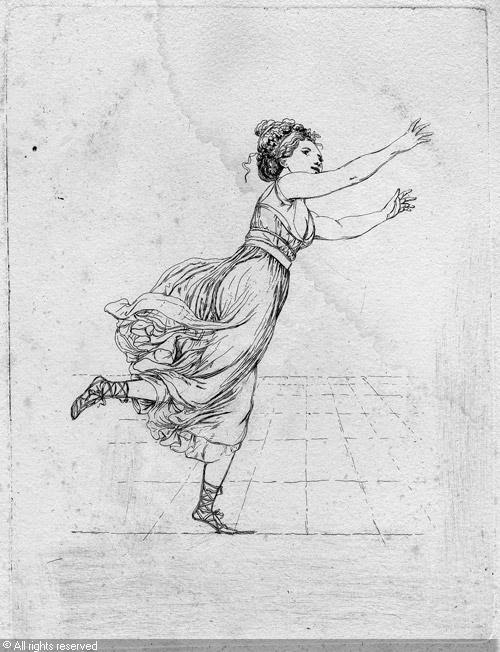 How modern, compared to the social dance, it's dance meant as a performance, to look at, to admire, not necessarily to participate.
Posted by Seidenweberin at Tuesday, February 26, 2013 No comments:


Of course one is free to check out  "The Round" though Playford is even more outdated than Thompson in our time. With the advanced digitalisation of archives access to period sources became much less an issue than a couple of years ago:

e.g.:
"A Description of the correct Method of Waltzing, the truly fashionable species of dancing" by Thomas Wilson, published 1816. The link gives you the PDF of his instructions

Or a tad earlier
An Analysis of Country Dancing Thomas Wilson's thoughts and recommendations on Country dancing, published in 1808 (also a PDF)

Evidently that this name had to capture my attention:
"Treasures of Terpsichore"
A companion for the ballroom, 2nd Edition published in 1816. (also a PDF document)
Posted by Seidenweberin at Wednesday, October 19, 2011 2 comments:

Inspiration - and also a wee hint how to place your feet. Third position is nearly always your starting position, better get used to it. 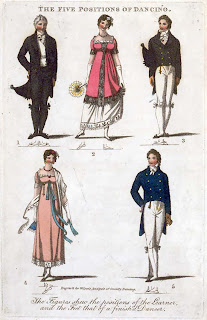 Posted by Seidenweberin at Monday, October 17, 2011 No comments: